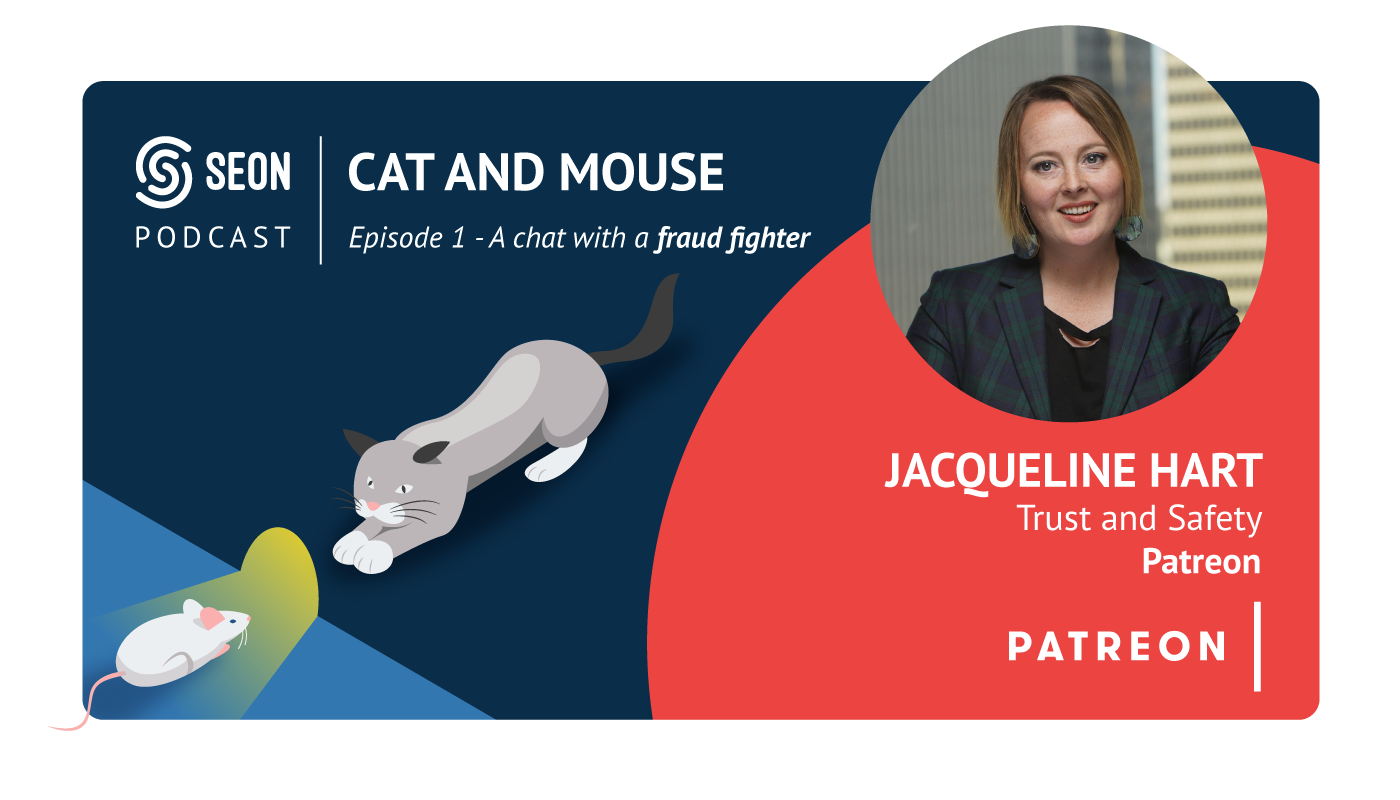 The first SEON podcast features Jacqueline Hart from Patreon. Here is a summary of her most insightful comments.

Over the last few months, Jacqueline Hart, Head of Trust and Safety at Patreon, appeared as a guest on a number of podcasts. The Online Fraudcast with Brett Johnson & Karisse Hendrick, and In Check with Fintech, by Payments & Cards Network.

She also graced our own podcast, Cat and Mouse, to offer pragmatic advice on how to fight fraud and be a better risk manager.

The interviews were tremendously insightful. Not only because Hart is a passionate, seasoned risk manager with 20 years of experience in the global online payments fraud world.

But also because Patreon, as one of the most innovative and increasingly popular platforms for creators, tends to do fraud prevention slightly differently.

Which is why we wanted to gather some of the things we learned about Patreon’s fraud trends and share them with you here.

Some prefer to call it risk, others favour the word fraud. But at Patreon, Trust and Safety is the preferred term. As Jacqueline Hart put it:

As she further explained in another podcast interview, it also helps to encompass more business practices:

“Trust and safety is really important because we’re trying to be inclusive and bring all types of creators onto our platform. When you say fraud and content moderation, these are old and banking heavy terms, because they were very popular back in the day. It doesn’t encompass the fact that we’re trying to create trust and an inclusive environment.”

This is particularly important as Patreon deals with younger creators and audiences. Their goal is to keep everyone on the same page, but also to take a softer approach to manage risk.

“People used to call us revenue blockers,” Hart said in her interview with Karisse Hendrick… “And the thing I always try to say is that we’re revenue enablers. There are things we’ll never take money for, so we want to allow you to take a bigger portion of the pot.”

In short: it’s about presenting themselves as the good guys, even if they already know they are.

2. Fraud Management Is Integral to its Business Model

This is a point many fraud managers will feel envious about. And maybe it’s because Hart brings her years of expertise with PayPal, iGaming powerhouse Paddy Power, and Ingenico, amongst others, or maybe because Patreon understands risk better than other companies.

But the point is that risk management is at the core of how the platform does business, whether they focus on taking out fraudsters or moderating content.

“I like to say that Patreon is a party, and [the anti fraud team] are like snipers taking out people. And then there’s the content moderation team and they’re more like bouncers. They’re very visible and they shouldn’t have to deal with fraudsters. The one thing that gets confusing is they’re all called Trust & Safety.”

And when asked in another podcast whether it was something Patreon understood, she said:

“We hope to be part of the conversation because in tech companies and startups there tends to be a lot of quick movements. Product managers and products are going out so quickly that you need to have a voice at the table. And if you’re seen as a blocker, you don’t get invited until the very end of the party. So let’s think about how people are going to abuse the system before it happens.”

We’ve already covered the surge in fraudulent FX accounts during the pandemic, and Patreon confirms that as a P2P platform, their rates are also increasing drastically. As to the kind of fraud they have to fend off, it’s mostly:

Card testing: because they tend to process smaller transactions, fraudsters use Patreon to test the card numbers they acquired on the darknet for $2 – $3.

ATO: Patreon creator accounts are valuable since they operate as virtual sources of revenue. Fraudsters who manage to take over one of their accounts will immediately drain them of funds.

Collusion: in Patreon terminology, collusion happens when a content creator and a Patreon are working together to transfer money and split the profits.

Regarding collusion, Jaqueline notes that some cases are extremely hard to prove, especially if the content creators were initially legitimate, but got offered a deal by a fraudster. In that scenario, a content creator, for instance, doing a Patreon podcast, is contacted by an individual who offers to fund their art with huge amounts coming from stolen credit cards, on the condition that they share some of it back.

This practice has also been on the rise due to the Covid-19 crisis, as many creators are worried about losing revenue and can be tempted by less legitimate offers. And as Hart puts it, “it’s easier than ever to start your fraud business thanks to the dark web.”

As Hart recalls, one of her former bosses once said that: “if you want 0 fraud, your only solution is to process 0 transactions”. Unfortunately, she knows things aren’t that simple, especially because blocking payments can have disastrous consequences for Patreon creators who rely on the platform as their sole source of revenue.

In fact, at Patreon, they call false positives “customer insult rate” to reflect how primordial churn can be for their users.

So, on the one hand, Patreon does leverage automation and Machine Learning to decline and accept the cases that are clear-cut. And Hart emphasizes how the model needs to be carefully calibrated, as a wrong rule can turn into a negative cycle of false positives.

But they also do take extra care to tweak static rules regularly and manually, – hopefully without creating so much friction that the patrons are turned away.

“ I love where the machines have taken us (…) because AI and Machine Learning can take out those things that are very very bad (…) but a lot of the time there’s false positives. And if you’re teaching a machine in a certain way you have to deal with the fallout from that. So there’s that grey space in the middle and that’s where I like my teams to operate.”

In short, it’s the same balancing act all fraud managers have to perform all over the world. But once again, Patreon is extremely customer-focused in their approach.

This last point arose when Hart discussed her career over the years. One thing fraud managers aren’t necessarily aware of is that their knowledge can be overlooked within the company. Executives tend to worry about success rates rather than techniques used to reduce fraud, when, in fact, there should be a better understanding of it as a whole:

In fact, fraud managers worldwide have a lot to gain from sharing their insights and expertise with each other. While their knowledge tends to be scattered, attending conferences, gathering in industry-specific groups and forums, anecdotes online: these are all fantastic ways to explore new fraud-fighting techniques and tools.

“I know that there are now former fraudsters who do talks, and every time I listen to them, they talk about how networked fraudsters are. How they’re all working together. And I feel like the more we, as fraud professionals don’t work together, we’re constantly behind the eight ball.”

As a side note, this is precisely why, at SEON, we have created a LinkedIn group specifically for fraud experts to gather and share their experiences.

It’s not exactly controversial to say that certain companies take fraud prevention less seriously than others.

But what Jacqueline Hart demonstrated clearly over these two podcasts, is that we can sometimes forget how impactful fraud can be for those affected. And at Patreon, with their customer-focused approach, every chargeback or account takeover is seen as an affront to their ethos.

There is a lot to find inspiring here. And even if fraud detection, or risk management, or trust and safety are sometimes messy and challenging affairs, it’s comforting to hear about examples where companies do it right. And at SEON, we’re committed to becoming better at fighting fraud as a community so we feel less alone against the bad guys.

Patreon is a platform that connects creators with paying audiences.

You can listen to In Check with Fintech here