5 Things We Learned From Our Interview With Kamil Przybyla 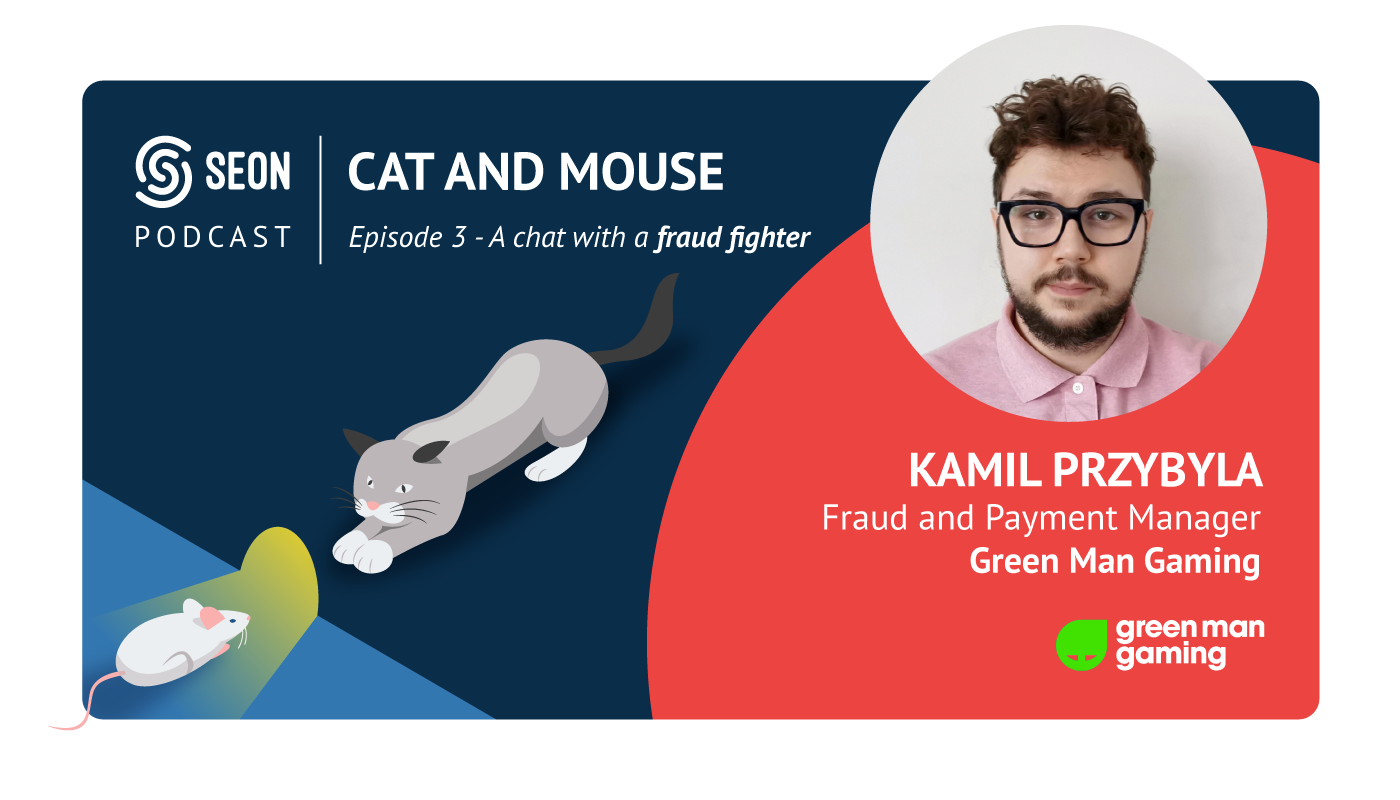 Episode three of the SEON podcast features Kamil Przybyla from Green Man Gaming. The online video game retailer delivers over 6,600 games to 195 countries. Let’s find out how managing fraud works for them.

Kamil Przybyla has been steadily climbing the ranks of Green Man Gaming’s fraud department. During his 6 years career with the British games retailer, he has learned loads of tips and tricks that could help new fraud managers and seasoned ones alike.

And as the online shop continues to grow, Kamil has had plenty of opportunities to analyze fraud trends, see where the industry might be headed, and what tools fraud fighters might need. Here are a few of the insights he shared in our Cat & Mouse Podcast.

Something we’ve heard repeatedly in the fraud industry: customer service agents tend to have very good first-hand experience of fraud. It’s certainly how Kamil got started in the field, mostly by being curious about certain cases:

“I found myself sending a lot of questions to our payments and fraud team. There were one or two agents at the time. (…) Normally, you’d just escalate and forget about it. But I‘d be constantly asking on the chats, or talking to agents, to give me more background (…) I was very curious from the beginning.”

This curiosity for understanding fraud is a quality Kamil also looks for in new team members. Like many other analysts or managers we speak to, he believes that asking questions is the only way to get far. Failing to do so means you’ll always be missing out on new patterns and attack vectors.

2.You Never Get Bored or Complacent in Fraud Management

“Every day is different. (…) You never get bored. Fraud is always evolving, so you need to be evolving. Logging in tomorrow, I don’t know what’s going to happen. If there’s going to be a lot of fraud or if it’s going to be quiet. It’s not like a nine-to-five job where you go in the office, and after five you’re done. You just need to keep an eye on everything, all the time.”

This answer is how Kamil explains why he’s stayed at the same company for 6+ years. It’s certainly a reason to be excited and to keep thinking on your feet when fighting fraud.

But Kamil also says he’s very lucky to have found a good team to work with. As he puts it:

“I think the second thing is my team. I’ve been with them for five years. I know them and they know me and they are my motivation as well.”

Kamil learned on the job, and according to him, fraud management expertise isn’t something that’s taught in schools (yet). 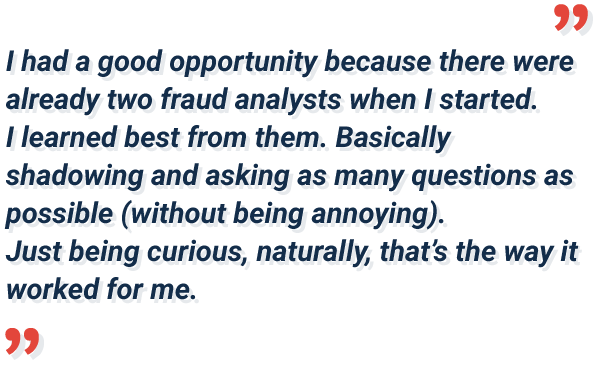 Fraud managers tend to learn on the job, by developing an almost intuitive sense of the patterns they detect. According to Kamil, it takes an inquisitive, detail-orientated person to make a great fraud analyst, and the theory can only get you so far.

When asked about the strangest fraud attacks he had thwarted, Kamil pointed out instead that it’s not necessarily the type of attack that stood out for him, but how relentless some fraudsters would be.

“Some of them might just try once or twice and leave our shop. But then they come back, and you remember: ‘Oh, I think that’s the same guys we had, like, four months ago.’ And they’re still trying the same product or the same country, and we see that it’s the same trend. So this is one of my tips. You should never delete your fraud rules straight away, because they might come back. So you should always keep some kind of copy in the system of the rules that stop current trends.”

5. Machine Learning Could be a Double-Edged Sword

Kamil also discussed the technology and tools fraud managers can leverage to fight fraud. It turns out, he doesn’t believe there will ever be a magic bullet to stop individuals with the wrong intentions.

But of course, Kamil still believes gathering data is key. The more he and his team can acquire, the better they can be at their job.

Green Man Gaming is under constant pressure to deliver game titles to millions of players worldwide, and in real-time. Of course, fraudsters want a piece of the action, and can be relentless in their attacks.

And while Kamil Przybyla. agrees that fraud managers are always one step behind fraudsters, he also believes that sharing knowledge, curiosity, and gathering as much data as possible can tip the scale in their favour.

Green Man Gaming is a multi-platform catalogue of over 6,600 games.