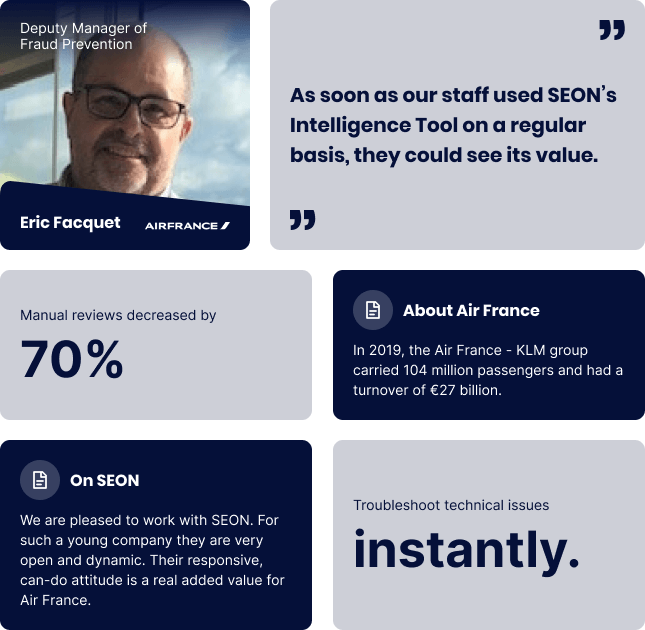 Air France is a leading global player when it comes to passenger transport, cargo transport and aircraft maintenance. Founded in 1933, it is the number one French airline. Together with KLM, they are one of the world’s largest air carriers by revenue and passengers transported; in 2019, the Air France-KLM group carried 104 million passengers and had a turnover of €27 billion.

The biggest challenge for Air France was that its fraud solution was reactive, rather than proactive. Transactions made with stolen dark web credit card numbers went all the way to checkout, and cybercriminals often bogged down the risk team’s operations.

The company needed easier ways to access information about potentially risky transactions, and clear intelligence that would enable it to make better decisions, quickly.

Eric Facquet, Deputy Manager of Fraud Prevention at Air France began looking for a tool that would be responsive and support IT in its goal of reducing fraudulent attacks. He wanted something that could help analysts and allow them to increase productivity while saving on time and costs.

SEON Wins With Its Agility

As soon as our staff used SEON on a regular basis, they could see its value.

The solution came from SEON, which delivers data enrichment based on a few data points such as an email address or phone number. Already successfully in use at KLM, it was only a matter of testing it with Air France’s system.

“SEON came recommended to us by KLM, and after first completing a purchase order, we knew we wanted to go further,” Eric says. “We’ve never looked back.”

And the results spoke for themselves. As Eric puts it: “As soon as our staff used SEON on a regular basis, they could see its value. It immediately started saving them time as they didn’t have to trawl through the usual checkpoints. So much so, that the time spent by Air France analysts on manual reviews is down by an impressive 70%. Instead, all the information they needed was on one screen with a simple scoring system enabling them to see if a transaction was real or not.”

Partner with SEON to reduce fraud in your business with real-time data enrichment, whitebox machine learning, and advanced APIs.

We are pleased to work with SEON. For such a young company they are very open and dynamic. Their responsive, can-do attitude is a real added value for Air France.

For Eric, the success of SEON’s integration is measured both by the reduced time in manual reviews, and the partnership itself.

“We are pleased to work with SEON,” Eric says. “For such a young company they are very open and dynamic. Their responsive, can-do attitude is a real added value for Air France. We have a great relationship with our contacts there, it’s always easy to reach them which can’t be taken for granted in today’s digital world.”

Finally, Eric also highly praised the team’s willingness to deliver better products. “We’ve been impressed that SEON is constantly working to improve their tools. They refuse to rest on their laurels and are adapting to the changing needs of the industry.”

To see how SEON can help your organisation reduce fraud, check out our products.